The 19th “Annual” Southern California Linux Expo (SCaLE) has come and gone. Originally scheduled for early March in Pasadena, it was pushed back due to the Omicron surge that hit Los Angeles particularly hard. This year's event was an interesting step backward in time, as the total conference attendance was lower and it returned to its former home at the Los Angeles Hilton, near LAX, due to a scheduling conflict with the Pasadena Convention Center. The last time I attended SCaLE was five years ago when I delivered the DevOpsDays Los Angeles Keynote at the LAX location, so I was right at home.

SCaLE is a rare and unique event that still draws on its heritage as the place where five different Southern California Linux Users Groups (LUGs) came together. It attracts professionals and enthusiasts alike to a single event, which is why it's scheduled for the weekend. I met several attendees who brought their whole families, people with jobs completely outside of technology who stay up late in the night playing with Linux kernels and Kubernetes clusters on Raspberry Pis.

Kubernetes is top of mind

Without a doubt, the most popular topic for professionals and enthusiasts alike was anything related to Kubernetes. It’s absolutely the accepted method for deployment. An entire track was dedicated to it and there was a Thursday “Getting Started” workshop.

One particularly fun session was “Speedrunning Kubernetes Deployments” by Kat Cosgrove of Pulumi. That session was followed by the always popular “Must have controllers in Kubernetes” and several other talks about hardening, multi-region deployments, cluster management, and more. When talking with attendees, the most common frustration with Kubernetes is just keeping up with the rate of change and best practices.

An emerging trend on the expo floor was solutions for day-two Kubernetes problems—like testing, deployment, and security—that teams face after completing their initial Kubernetes rollouts. Traditional CI/CD players like GitLab and CircleCI were both on hand, focusing heavily on deployment and DevOps capabilities. New Kubernetes native entrants in the market—such as Harness and Octopus Deploy—also showed off deep integrations for managing CD in a Kubernetes world. And many CD services are putting emphasis on DevOps collaboration around infrastructure.

Collaboration between application and operations teams, particularly around security, came up continually in our booth conversations. It was discussions like these that originally inspired us to build Mondoo’s deep integrations with CI/CD platforms. Now teams with Mondoo can:

It goes without saying that a large proportion of tech in Los Angeles revolves around the entertainment industry. At the Mondoo booth, we got to meet several technologists who were excited about how they could use our technology to satisfy their compliance requirements and improve their security posture.

Most of us know about security compliance for credit cards (PCI-DSS) and healthcare (HIPAA), but did you know that the Motion Picture Association of America (MPAA) has their own “Content Security Program”? This was news to me. Like many other frameworks, it draws heavily upon ISO 27001/27002 and NIST SP 800-53 controls and even includes a helpful appendix mapping the controls, but deviates in some key areas, such as controls for:

Topics like alarms, keys, and perimeter security take on new meaning when you’re securing a film set instead of a data center, but it’s the controls related to physical searches that strike me as the most interesting, namely:

Mondoo can’t query your environment for baggy pants. But we are excited about opportunities for Mondoo to help secure infrastructure in the entertainment industry. With the wide range of devices and services used in media production, the possibilities are intriguing.

As the saying goes, you can’t secure what you can’t see. Many visitors to the booth loved the massive collection of policies as code that are available in Mondoo Platform’s Policy Hub. They were impressed by how quickly they could use Mondoo to scan their assets to get visibility into the security of their infrastructure.

Upon learning that the policies themselves are written using our powerful Mondoo Query Language (MQL), one infrastructure engineer remarked, “Do you mean I can use your query language to find all of my AWS RDS instances that are public facing?!?”

Mondoo Client not only runs scans against remote targets like AWS, GCP, Azure, Kubernetes, and more, but also you can open an interactive shell directly against those targets and live-query your infrastructure.

To answer the infrastructure engineer’s question, we popped open a laptop and simply ran mondoo shell -t aws to connect to a real AWS account. Then we ran the following MQL query:

Within seconds we had the answer, which prompted the response, “You guys definitely need to talk to my security team.”

A few of my favorite things

SCaLE’s dedication to openness goes so far as to make video of the entire conference available online for free. On the SCaLE YouTube page you can find all the material. Just be warned that generally the recordings are streams of a given room for the full day. Be sure to review the schedule to find a particular talk you're interested in.

Here are three of my personal favorites from the event:

I also want to give a special shout-out to System76, the Linux-first hardware manufacturer, who introduced their amazing new Launch keyboard. The weight and quality of the keyboard has to be experienced to be fully appreciated. Built like a 1920’s typewriter, with configurable keycaps and fully programmable LED’s, the keyboard is a gem.

And, of course, the best part of any conference is spending time with friends, old and new. The Mondoo SCaLE crew was so happy to connect with JJ Asghar, Developer Advocate at IBM, and Kennon Kwok, Product Solutions Architect at DataDog!

Get ready for SCaLE 20x

This year's event was delayed, but the 2023 event is expected to be back on schedule for March in their Pasadena, CA home. We’re looking forward to seeing all our Southern California friends again then. In the meantime, keep on scanning and be on the lookout for the final dates of next year's event at https://www.socallinuxexpo.org/. 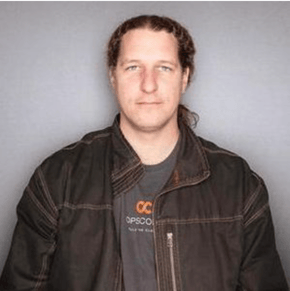 Ben Rockwood is the VP of Engineering & Operations at Mondoo. He helped build the first Infrastructure as a Service cloud at Joyent in 2005 and became an influential voice in the DevOps movement since it began in 2009. He’s also helped advance operations, security, and compliance at Chef, Packet, and Equinix. He lives on Bainbridge Island near Seattle.

KubeCon + CloudNativeCon North America 2022 may have come and gone but the learning should never end! We had a great time at ...
Start Reading
Ben Rockwood March 10, 2022 2 min read

Mondoo is proud to announce that we have achieved SOC2 Type 1 certification, demonstrating our commitment to the highest levels ...
Start Reading
view raw